Side gardens and entrance to the Breakers

This week I’m sharing my photos of the Breakers in Newport for my Thursday Doors post. While I love taking pictures of so many parts of fancy houses and buildings, I’m quite enchanted by doors. I’m so grateful to have found some like minded people who also like to share photos of doors. I hope you enjoy my tour of this “cottage.”

“The Breakers is the grandest of Newport’s summer “cottages” and a symbol of the Vanderbilt family’s social and financial preeminence in turn of the century America.

Commodore Cornelius Vanderbilt (1794-1877) established the family fortune in steamships and later in the New York Central Railroad, which was a pivotal development in the industrial growth of the nation during the late 19th century.” from the Newport Mansions Preservation Society.

This house had so many beautifully crafted features. Each room had magnificent doors and the views from one set of doors into the other rooms was very interesting. Some of the rooms had very distinctive styles. The first floor was extremely ornate. The second floor was comparatively simple, but probably my favorite rooms were there. The bathrooms were fantastic. I would love to have such a bathroom today! Here are the doors and doorways of the first floor.

The second floor doors were simpler.

There were secret doors that the servants could use to unobtrusively go about their business. There was a servant who’s job it was to go throughout the house and close and open window shades and shutters as the day progressed. That was the whole job, but I’m sure it kept him super busy! Old fashioned air conditioning. The pantry and the closets were amazing.

These are the rooms of the first floor. The details amazed me. The skylight is by Tiffany and it is so beautifully framed by the staircase. One of the rooms had portions of the wall “painted” with platinum. The floors and ceilings were all exquisite.

I really loved the comparative simplicity of the bedrooms and bathrooms. The kitchen was a wonder. It was fascinating to see how they used materials and design to make the work of the kitchen more efficient. The zinc and marble were utilitarian rather than a matter of style.

There was one tree on the grounds that I found particularly beautiful. I’m not sure what kind of tree it is.

I hope you have a beautiful day. For more door photos check out Norm 2.0. 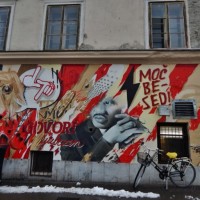